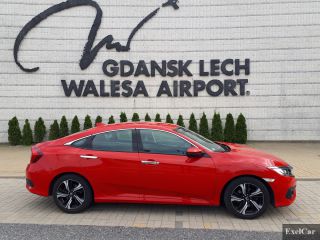 The X generation of the Honda Civic is to be, according to the manufacturer's intentions, the last one produced in Europe. Talking about it, its main designer, Mitsuru Kariya, emphasizes the provocative nature of the project and the fact that the challenge has been taken up, thus a kind of market offensive. In this case, it is not so much about the noticeable, systematic quality improvement, which is the hallmark of the Japanese and Honda, but about a qualitative leap - inherent in what is already known.
The innovation is the multi-link independent suspension of the rear axle and the location of the fuel tank that shifts the center of gravity to the rear. It is stable and safe when the engine - no longer naturally aspirated, albeit with variable valve timing - produces acceleration. Body versions slightly differ in design, but the coherence of the model concept is not affected.
The grille, half covered by a chrome strip placed between the edges of the headlights, simplifies the overall style and introduces minimalism (in our sedan version we also have a chrome accent above the side windows). All types have raised door ribs to add visual lightness. The car, despite the local diversity of the body offer, in Poland is available in two versions, hatchback and sedan, and they are available at Exel rental company.
In both, the board is easy to use, both have clear clocks, temperature and fuel gauges, a tachometer, and a lot of storage compartments. The trunk holds 519 liters, so it is extremely roomy for a car class. Fuel consumption remains at an average of 6.5 l / 100 km. We invite you to test our Honda cars and share your driving experience.